Fifty vertical earthcast sculptures populate the gallery, at once industrial and abstract whilst also organic and evocative. As with much of Carey’s recent works, the monumental scale of the works belies the fragility of the plaster, soil and colouring pencil used in their making. Their vertical stance recalls the timelessness of standing stone monuments, evoking a primitive connection with the substance of life. Carey’s use of scale is intentional – the sculptures tower over an individual, whilst still posing a relationship with the human body, oscillating between the figure and form of a tree trunk through their knotted, scarred surface.

Carey’s recent work has explored the most basic and fundamental methods of art-making, including carving, weaving and wall-drawing. The earthcasts are produced by casting directly in the ground: Carey buried lengths of decades-old salvaged timber in the soil, lifted them out to form rudimentary moulds. Into these imprints she pours plaster which, once solidified and excavated, bears remnants of the soil, stones and plant roots absorbed during this process.

Referring to soil as the skin of the earth, Carey’s interest in soil as a material is born out of its essential relationship to life and simultaneous ability to embody death. Its complex constitution combines minerals, water, air and the decaying matter of once-living things. In this way the earthcasts continue Carey’s engagement with notions of mortality, memory and modest commemoration of everyday ritual, aligning with her previous artistic mediums of bone, ash and dust.

Both before and after the casting process, Carey makes her own impression on the materials of these sculptures – beforehand, through discreet cuts and reliefs carved into the timber; afterwards, through delicate, pastel coloured pencil shading, a recurrent approach in Carey’s work, suggestive of naive mark-making and the universal human urge to make an impression on our surroundings. 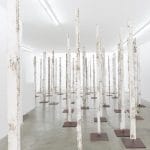 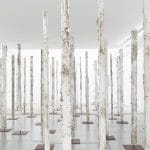 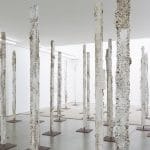 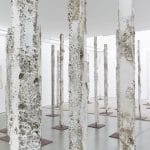 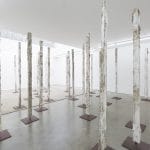 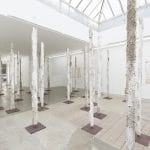 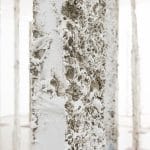 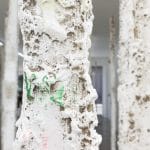 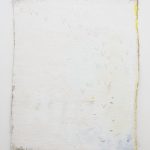 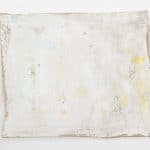 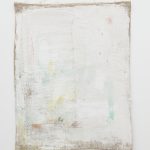 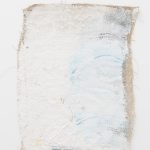