Galerie Rolando Anselmi is pleased to present an exhibition of new work by Jodie Carey. This exhibition weaves together ideas surrounding time and timelessness, to explore traditions of commemoration and remembrance. Drawing influence from the land and ancient images of stone circles, Carey assimilates the geometric simplicity and large-scale directness to create works that seek a material response to the idea of sculpture, as a carrier for collective memory.

Early Old comprises of two plaster sculptures cast directly in the ground. The plaster surface bears all the traces of the land in which they were made, engaging with the earth itself – centuries of soil, the skin of the earth, without which there would be no life. As with previous series, the handmade materiality and material roughness of the works is contrasted by the vulnerability of the ephemeral materials Carey employs in their making. Primarily physical works, the bold simplified forms convey a sense of monumentally, their vertical stance akin to prehistoric ancient monuments. They echo the immortality of standing stones and suggest a primitive connection with the substance of life. Final marks made by the artist, using paint and colour pencil, emphasis the roughly hewn forms.

In sharp contrast to the large simplified forms of Early Old is Fallen, a thousand porcelain leaves which litter the gallery floor. This juxtaposition of size, scale and material between the two sculptural works emphasis further the fragility and delicacy of the ceramic leaves. Each leaf is unique, created by dipping its skeleton directly in slip. After firing, the ashes remain immortalised within the porcelain body – the elegiac, transient nature of falling leaves captured forever in ceramic.

Untitled (patchworks) are created from linen and canvas dipped in plaster and worked on using paint and colour pencil. Despite bearing no discernible narrative, in medium and appearance, they recall folk- traditions of recording and recounting collective memory through tapestries and quilt making. The simple mark-making evocates wall or cave drawing, the most ancient practice of recording human history and memory.

The contemplation of mortality, of memorials and of the passing of time, is frequently addressed throughout the history of art. Jodie Carey eloquently continues this tradition, utilising ideas, materials, processes and techniques which weave together elements of the contemporary and the traditional, to create compelling and poignant works, full of elegance, gravity, commitment and poetry. 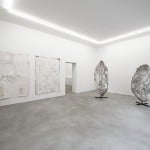 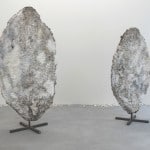 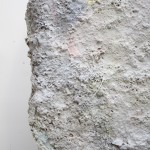 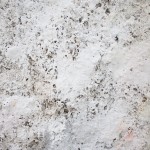 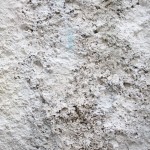 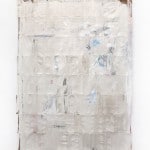 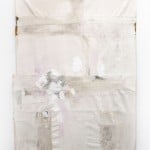 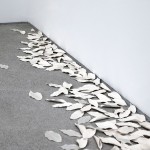 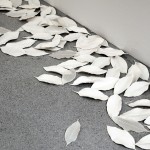