Neue Berliner Räume is pleased to present the special exhibition A room that was never meant to be, featuring works by British artist Jodie Carey.

A room that was never meant to be takes place on one afternoon only and was conceived especially for the space of the exhibition.

Located in one of the most eminent buildings of Berlin’s old centre, the exhibition space was originally designed as a headlight for a subjacent hall, bringing natural light into the lower parts of the building. With the decision to close the hall’s ceiling after the Second World War, a hidden room was created in the attic of the building. As such, this room was never meant to be. It has not been used publicly in the years of its existence and with the pending renovation of the building complex that houses the space, the room will soon disappear again.

Jodie Carey’s Elegy series (2012) consists of five prints from original photographic glass plates that were produced in the 1920s. Glass plates were used as photographic material before the rise of celluloid and were at the centre of the rapidly developing photography technique. Today, their usage has almost entirely faded and original plates are extremely rare. The five Elegy plates depicting classic flower arrangements emerged during an attic clearance and were subsequently acquired by the artist. In an attempt to save the fragile and damaged photographic traces on the plates, the artist decided to carefully produce digital prints. By choosing not to “clean” these prints from the signs of the plate’s material damages, the artist saw a possibility to memorialize the entire history carried by these plates; a possibility to uncover not only the fading images once inscribed onto the plates but also the marks of their history. Making these blemishes visible is a way of being truthful about these objects and the whole depth of their story.

In the context of this particular presentation of the works, the five prints refer to a loss. Inside a room stripped of much of its former splendor, they are filling a void — if only momentarily. As a traditional symbol of decay and timeliness, the floral arrangements poignantly echo a sense of melancholy. The tangible history of the space and the ever present signs of transience work towards a subtle intertwining of work and space. What emerges is a temporary dialogue that points to two histories marked more than anything by their slow but graceful withering. 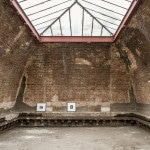 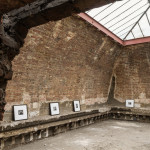 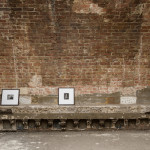 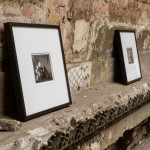 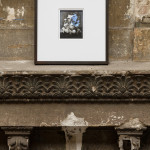